My Bio: The Short, Professional Version 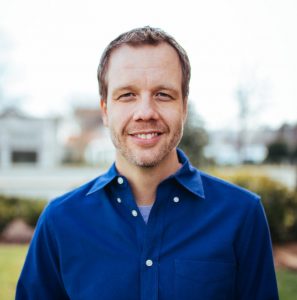 I’m a psychotherapist and a dad, and I recently wrote my first children’s book.

Born in Asuncion, Paraguay, I moved to the United States to pursue my counseling career. I met the love of my life in Richmond, VA. A few years later, we became dads through open adoption.

I am the founder of LaunchPad Counseling, a private practice in Richmond, VA. Although I currently work mostly with adults, I spent years as a Play Therapist (Child Therapist).  Now I also coach parents to use play therapy principles to build strong, healthy relationships with their children.

Raising a girl opened my eyes even more to the unique challenges girls and women experience in today’s world. I wanted to support in my daughter the best way I could, knowing that as a male, I wouldn’t share many of her experiences. So I started researching and learning more about raising girls. Inspired by watching her courageous approach to everything, I started Brave Like A Girl, a website that focuses on raising empowered girls.

My first children’s book “What Does A Princess Really Look Like?” released in 2018. It will be the first in the Brave Like A Girl series. The book tells the story of a girl’s journey to expanding her concept of a princess. Her dads help her understand that though a girl can be anything she wants, she doesn’t need to be everything, and she certainly doesn’t need to be perfect.

My Bio: The Long, Personal Version 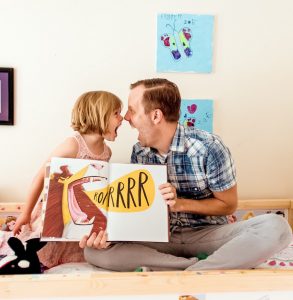 I was born in Asuncion, Paraguay. When I was about 10 years old, I wrote my first longer story, with my stuffed animals as the main characters. As a gay kid, I often created fantasy worlds as an escape from the homophobic culture that surrounded me.

At 25, I had never met anyone who was openly gay, except for one who died by suicide. I thought this was my destiny, too. There were no LGBT organizations in Paraguay. I lived in the closet with no idea that it was possible to be gay and live a happy, fulfilled life. Looking back, I can’t believe how different my reality was back then, compared to my life today.

I learned about conversion therapy through the internet. I was even able to connect a business trip (so no one would know) to an Exodus International conference. Exodus used to be the largest, worldwide “ex-gay” organization. I found hope in the belief that I could be “cured from homosexuality” and become “normal.”

Life in the closet was hard. I felt like I was a monster, but nobody knew. They would discover at some point. But in the meantime, I did everything I could to be the best at everything. Overcompensating like this was a lot of work. And I felt lonely – all the time.

In my search for some sort of change (ideally into one of those amazing heterosexual people), I decided to move to the US, where conversion therapy promised to help. (Conversion therapy is one of those pseudo-science-based treatments that supposedly changes people’s sexual orientation. Look into it, it’s actually laughable and terrifying at the same time!)

I got my master’s degree in counseling while at the same time attending the conversion therapy group. I quickly realized that what they taught in this group didn’t align with anything that I learned at school. Conversion therapy turned out not to be therapy at all. It was just a way to repress a part of myself because my religious beliefs didn’t align with who I was. Basically, it taught coping skills to deal with the stress people experience as they repress who they are, and attempt to live as someone they are not.

With that new insight, I began a different therapeutic journey – one that brought me to where I am today. The road was far from painless but it was more than worth it. 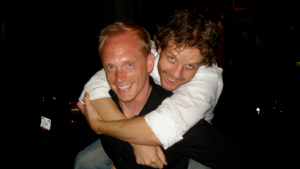 Back when we were young and beautiful

Shortly after, I met this guy at a bar. We connected because we both were fluent in German. Conversationwas easy. We talked until the bar closed. Then we went to another place – until that place closed. Both our phones had died when we said goodbye, so he promised to find me on MySpace (yes, I know). As they say, the rest is history.

We did all the things people often do when they find the one. We eventually bought a home, ate-in, binge-watched a ton of TV. Eventually, our conversation moved towards becoming dads.

After a two-year adoption process, we were picked by a lovely woman to become parents to her child. Because this was an open adoption, we met her two weeks before the baby came. We were there when our daughter was born. And we maintained a very close relationship with our daughter’s birthmother.

Becoming a parent changes you. Well, it changed us – in so many ways. At first, our relationship suffered because this new human was taking up all the time and space we had. After several difficult conversations, tears and sweat, our relationship improved again. And it became stronger than it had ever been.

At the same time, the way I saw the world was also completely changed by raising a girl. I had always been a feminist. But raising a daughter gave me insight into experiences I never had as a man before.

The fight for equality has always been my passion. I witnessed racial inequalities early on in life. I also always felt “less than” and lived in fear of rejection for being gay. And now, raising a girl, my eyes were opened to so many experiences that only girls and women face. 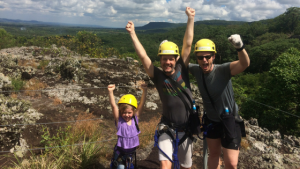 Mountains to climb! During a visit to Paraguay

I was already a psychotherapist, working with kids and their parents at my private practice. I then started Brave Like a Girl, a website with information for anyone raising empowered girls.

At home, my daughter was growing from a baby into a toddler into a preschooler… non-stop. This is where books came back into the picture. I loved reading to her. And when she was little, I read her all the books that included families like ours. She loved them!

Then she became less interested in these books. She didn’t want to read about families, or worse, parents! She wanted to read about little girls doing amazing things. As we worked through our bookshelves, I realized that children with gay or lesbian parents are basically absent in picture books. If the book didn’t focus on a specific LGBT issue, then it didn’t have LGBT characters. As if we, LGBT people, didn’t have normal problems. 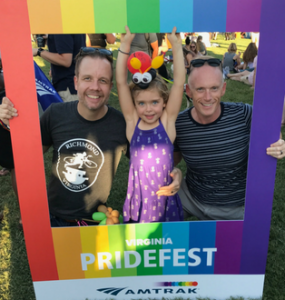 Our family at Pride in Virginia

This needed to change. We needed more diverse picture books. So I wrote one! “What Does a Princess Really Look Like?” was inspired by conversations with my daughter. I wrote in the hope to expand the princess image that girls didn’t really even chose for themselves. It’s like a pre-fab concept that is very easy to adopt. The book also naturally incorporated the main character’s dads.

And with that, we arrive at the present moment. I hope the book will be helpful. I hope families everywhere enjoy it. And I also hope that non-LGBT families can use it to expose their children to all kinds of families without making a big deal out of it.

Oh, and one more thing. I LOVE meeting people. Please leave a message, send an email, add me on social media. I would love to see who is out there reading! I really appreciate when people reach out. So, let’s connect!

And if you prefer to stay incognito, that’s fine too. Just by reading this, or the book, we are connecting.

Thank you for reading! It means so much. 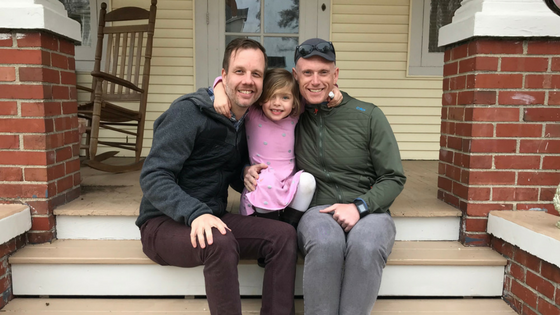